After being so good and posting twice in one week, I have fallen off the wagon again (yes, I warned you).  But I just received some motivation to get myself back to this humble blog...
I came to graphic novels pretty late in life, so I have missed out on a lot of backstory for the established characters of the Marvel and DC universes, and have been too intimidated to try jumping in.  I have stuck to new and one-off works, like FreakAngels (that I've fangirled over here before), Girl Genius (ditto), and Watchmen; or graphic novel versions of books (like the awesome Lovecraft graphic) or the continuing of tv shows (Farscape.  Farscape, Farscape, Farscape).  But I've always wanted to get into the classics.
While processing returns at work (how I find all of the best books) I noticed the first volume of a new Superman series, written by Babylon 5's creator and writer, J Michael Straczynski, and knew I had to try it based solely on the awesomeness of B5. 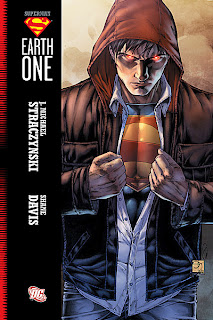 I really liked it; it was easy to read and the illustrations were awesome.  Can you hear the 'but' here?  But...  It felt really really short.  In fact, a few weeks later while writing this, I can't even remember what happened except a lot of great backstory...  or was that in the second volume? 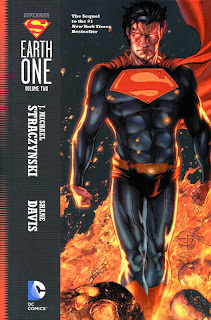 There is a plot to both volumes, but they're not very memorable.  In the first there are robots and an alien determined to kill the very last surviving Kryptonian; in the second a man horribly mutated into a power-sucking thing that looks a lot like Venom from Spiderman.  The draw for me, though, is the exploration of this new Superman/Clark Kent.
Clark isn't the Clark I know from the movies, tv show, or through popular culture.  He's mega smart for one thing, and has hidden that away from the world along with his traditional abilities.  He is withdrawn without any friends, having never had a girlfriend...  basically a loner, who has withdrawn so much from society that he doesn't even seem to think that someone will notice him applying for jobs with various sports teams (using his super speed and strength) and research facilities (using that super brain).  This Superman isn't so super, in fact, it takes him an embarrassingly long time in the first volume to decide to help save the earth.
I like this Superman.  I have always thought Superman was too perfect, without any selfishness, a country boy that everyone loved, whose only flaw was being just a little too innocent when he moved to the big city.  This Superman is more real, a little emo, and not as goody-good as I'm used to (for example, he has no qualms leaving a bad guy in the north pole in a t shirt and bare feet, and telling him to walk home).  Although I wont be rushing out to buy them, I will read the third volume when it is eventually released - hoping that now that Clark's character has been fully fleshed out, there'll be a faster-paced story.


In other news, I have been asked to make an amigurumi for a colleague!  I was so flattered when he asked, but then became concerned - the only amigurumi I've ever successfully finished was a Dalek for Miss S.  I have started an amineko for myself and a puppy for Miss M, and not finished either.  So I am nervous.  I'll keep you posted!
at 10:17 PM