Look at this, folks, two posts in a week!  Don't get used to it...  Hehe.  Spoiler alert - as this book is pretty old, and you should have seen the movie by now, I'm not going to bother putting a spoiler image in like I usually do.  So here's a pretty picture in case you missed having one: 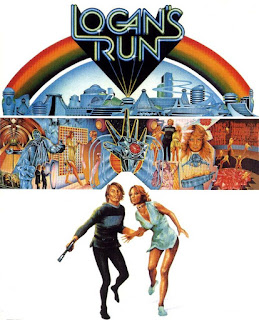 Logan's Run has been one of my all-time favourite movies for as long as I can remember.  A brief summary follows - brief because if you have seen it, you need little reminding; and if you haven't seen it, just watch it now please.  No, I mean it.  Go.  Now.

Logan is a DS man, a Sandman.  His life's purpose is to ensure all whose lifeclock palm crystal has progressed through red to flashing red to black are caught.  And killed.  Life ends at 30, one way or another.  Hedonism rules.  At 30 you go to Carousel and hope for rebirth, or you Run, and the Sandmen kill you.  The great computer who controls the domed city (outside of which there is Nothing) asks Logan to investigate Sanctuary, to become a Runner, losing his last years to serve the greater good.  And his DS partner Francis chases him.

The movie is beautiful; a masterpiece of classic science fiction cinema.  A post-apocalyptic dystopia where everyone is young and beautiful (even Michael York?).  The book is somewhat like the 'behind the scenes bonus' for the movie.  All of the poison of the society that one has hints of in the movie is brought to the forefront of the book, and it is disturbingly plausible.  What's worse is that the domed city is replaced by the entire world - a world-wide systematic eradication of anyone over the age of 21.  Consumption; decadence; and inhumanity; cruelty.  But the same sense of innocence is there too.  The actress who plays Jessica in the movie has huge, almost cartoonishly innocent-looking eyes, and both Logan and Jess are completely clueless once outside of the city.  Meanwhile, in the book it's a lot more subtle.

I initially had a problem with the ending because going to a space station felt a little like overkill - popping a sci fi trope in just for some excitement. But then I realised - as Logan and Jess escape the world in the book, so they do in the movie.  In the movie their whole world is the city- the dome is our atmosphere. In fact the book's somewhat open ending makes me feel a little odd about the movie - was I being force fed a fully completed dumbed down story all this time without realising it? Don’t get me wrong, I still absolutely adore the movie. But I have to admit, the book is a lot more challenging. I believe there are sequels, but it remains to be seen if the library (or even the publishers) bother with them.

I've been looking to buy this book for as long as I’ve known it exists, but until now thought it was so out of print I’d never find it. Sound familiar? Tajore Arkle, people - the greatest pain of my literary life.  I’m glad I read it, and, like Tajore Arkle, I can see myself wanting to reread it.