Hi all, we're still having problems with our phone and internet, so it'll be a few days before I can get on to post much.  Which coincides nicely with almost double the number of working hours I've been offered this week than I thought I was going to have.

But I had to spread the joy and share with you the excitement I felt when I saw this on the seaQuest facebook fan page (and the JB HI FI link [click the picture]): 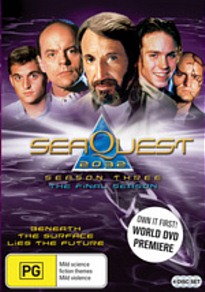 Looks like Australia is the testing ground for the viability of releasing seaQuest 2032 on dvd.  It's due out next month, and as I'll be in Australia in December, I am SO excited!  I can't wait to see this!  I remembered most of the episodes from the first and second seasons from when it was on in the 90s, but I don't think I remember season 3.  I didn't like it as much as the first two seasons, but was still heartbroken when the show was cancelled.  I AM SO EXCITED, you'd not believe it, it's like all my Christmases...  Anyway, if you're in Australia and love this show, please preorder it and show Universal that it's worth sharing with the rest of the world :-)
at 8:57 PM