Book Review: Journey to the Centre of the Earth by Jules Verne

I really enjoyed this book.  I have read 20,000 Leagues Under the Sea, and didn't enjoy that nearly as much.  In fact, I call 20,000 Leagues 'The Fish Directory' because the bulk of the book is descriptions of the various sea life the Professor is privileged to encounter.  At times, Journey to the Centre of the Earth verges on 'The Lithics Directory', but Verne seems to reel himself back, showing great restraint (or perhaps he was simply more enthusiastic about fish?).  This results in detail that adds to the story rather than detracting from it.  I'm sure Verne was a very intelligent person and wanted to share as much information in as great detail as possible, but in 20,000 Leagues, it really weighs the story down. 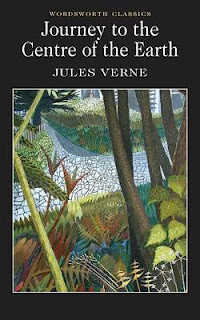 I think most people know the general gist of this story, whether from hearing about it or seeing one of the movie incarnations, so I won't worry too much about spoiling it*.  Young Axel (very cool name, by the way) is nephew to Professor Otto Liedenbrock, already an esteemed mineralogist at the beginning of the novel.  In a coded message (found in an old book), attributed to a savant by the name of Saknussemm and transcribed in runic symbols, Otto is delighted to find the directions to the access point for the interior of the earth.  In fact, this note claims that the tunnel leads to the earth's very center.  Consumed by a drive to attain even higher esteem, and armed with an admirable ability to ignore the protestations of his young companion, Otto drags Axel to Iceland.  There they find the tunnel at the top of an extinct volcano, and, along with their faithful (to the point of self-sacrificing) guide Hans, they plunge into a great adventure.

At the time of writing, the theory of plate tectonics was over 40 years away, which meant that Verne's contemporaries didn't understand the processes involved in the formation and activity of volcanoes.  The accepted theory of the era was that the earth was hollow, and tunnels and tubes ran underneath the crust of the earth that joined each volcano to one another.  Through these tubes, lava would flow, but after a volcano had become extinct, it was possible to travel through these empty tunnels.  And this is what Verne uses as his starting point.  It is true science fiction, well before the term was coined, in that a scientific theory is the very heart of the story.  Without these tunnels, no access to the centre of the earth could exist, and so there was no adventure to be had.

The fact that Verne wrote adventure fantasy based upon what must have been an amazing amount of scientific understanding and knowledge in the days well before our accustomed ease of access to information, makes his works worth reading on its own.  However, the story told in Journey to the Centre of the Earth is just as compelling.  Come on people, it has dinosaurs!  If you're not sold yet, I don't know what to do with you.


If I have inspired you to buy this book, please consider purchasing it from Mighty Ape (also, it's only $8!).
Using this link doesn't cost you anything and gives me credit to spend on more things to tell you about!

*Though, do see this article about how much more we enjoy a story when we have heard spoilers for it.
at 1:30 PM