I mentioned a while back that I had signed up for a cooking challenge based on the Edmond's Cook Book and its online 1914 edition.  The Wheeling Gourmet asked that entrants cook something from the 1914 edition, and its modern (that is, 2000 or later) equivalent, and I chose scones.  Because the plain scones had lard in them (which I can't abide), I decided that the analog to the modern scones I make (from Edmond's Classics, 2005) were the Yorkshire Tea Scones (even though they have an egg in them).  I have just had a lovely little tea party with Mum and my singing friend and her family, and my two batches of scones. 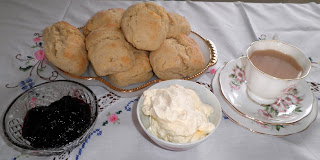 Butter is rubbed into flour and baking powder, then enough milk is added to get a sticky dough. 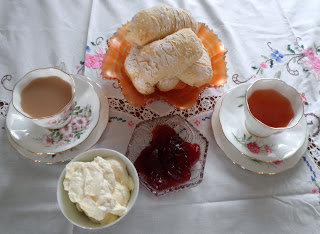 Butter is melted, milk is added and warmed and then added to sugar.  Flour and baking powder are mixed and a well is made in the centre.  The egg and then butter milk liquid is poured in.

They both turned out to be delicious and the votes for favourite came out pretty even (I think it was 3:2 [with one abstaining] to the 1914s).  I preferred the 1914 scones for a few reasons; although denser in texture, they sat much lighter in the tummy, the recipe made fewer scones (better for a household of two), and I just generally preferred the texture.  One tea party goer commented that the 2005 scones were sweeter, despite the lack of sugar in the recipe.  I hypothesised (and felt very smart about it) that this was because I didn't use unsalted butter, and that there is more butter in the 2005 version.

In summary, I LOVED this experiment, and think I might do another comparison soon!


*I found that I needed extra milk today.  The amount of milk you need changes from batch to batch, we think depending on the brand of flour you use, the brand of milk, and the weather (I am not kidding).
at 7:00 PM