Before the tv blew up last night (and by blew up, I mean it went PING and now we only get certain colours - we could see Hilary Barry's suit jacket but not her face on the news last night!), I had been watching Supernatural season one on dvd.  I have only one disk left, so I'll just watch the remaining episodes on the computer.  When Supernatural first came out, I liked it, but I'm not really good with scary stuff, so I only lasted a few episodes, and from then I've watched an episode here and there.  So this rewatch includes a lot of episodes that I've not seen.

I had hoped that in six years the stories and effects of the first season would have dated to become less scary, like old horror movies have (Boris Karloff is cool...  but so far, I've not found him scary).  However, I found that this wasn't the case, and was glad I was watching them in the daylight.  My favourite episode so far (remember I have three or four episodes left on the last disk) is also the one I found most scary - Bloody Mary.  After I watched that episode I avoided mirrors until Mum got home, which was annoying as I was getting ready to go out to dinner.  I don't think I have a least favourite episode because they all have positive aspects that outweigh any negative, and even episodes that are a little slow moving are enhanced by a focus on the brotherly relationship.

I was impressed by the lack of special effects, or that they blended in so well (especially when I looked up the season synopsis and found that the shapeshifting in Skin used makeup and prosthetics, not a computer), and for me, nothing is creepier than not seeing the bad guy coming.  Well, that and scary children.  Nothing scarier in this world than scary children (see the episode Provenance).  Lastly, I really liked that part way through the series they added a case that ended up not being supernatural at all.  I think it was refreshing, almost like I was building up a tolerance to the scary, and they made it real again. 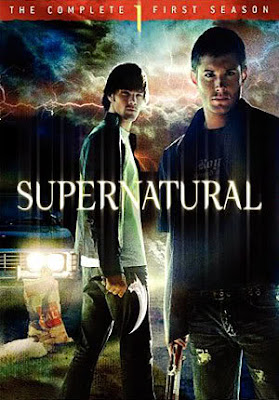 If I've inspired you to buy Supernatural on DVD, click on the picture to buy it from Mighty Ape.  If you do, I get credit so I can buy more pretty things to tell you about!
at 9:00 AM