Now that my friend has received her birthday/going-away present and has gone-away, I'm going to share with you the canvas I made for her (thanks to her for the first picture, that I stole from Facebook without asking :-).  It's another long post people, so if you're not interested in step-by-step pretties, just admire the first photo. 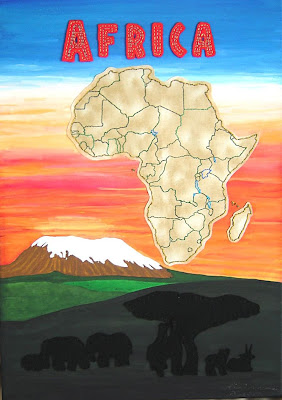 This one is a bit bigger than the one I made for Mum's birthday a few months ago, but it ended up taking about the same amount of time to stitch.  The time drain was in the painting.  In Mum's canvas there was little to paint other than a background of pretty colours and some leaves.  This time, I was ambitious - I painted a sunset scene of an African plain with Mt Kilimanjaro in the background.  I don't claim to be a great painter, which is why I use photos to trace an outline onto the canvas, and also use fabric and embroidery to make it more special. 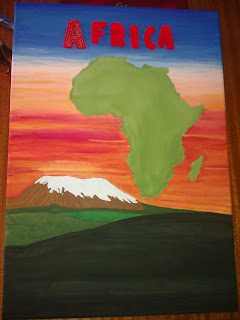 In this picture you can see that I painted the map of Africa, despite the fact that it would eventually be covered with fabric.  When I made Mum's canvas, I found that I had to make a set of butterfly wings bigger to cover the space that I hadn't painted, and although it looks fine, it's something I wish I hadn't had to do (for one thing it was another thing to do when I was rushing to get it finished, and for another it meant a waste of material as I had to throw away the first set of wings that didn't fit).

I also wanted to make sure that no white showed through the material I used, and thought the green was a natural choice.  In the end, I could see little places around the edge of the material where the sky colours had gone over the lines, so I was glad I'd painted the rest green (though I doubt anyone else would notice).

Then I found a nice font online, typed, printed, and pinned AFRICA to some bright red felt, and sewed it on.  You may be able to see just how bright the red is in the FRICA, but how the thread colours used to stitch it on have toned it down. 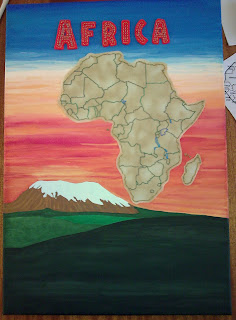 Then I transferred (using the same technique I talked about for Mum's canvas) a map of Africa with all of its borders onto some awesome material I found at Spotlight, but before I cut it out, I realised it was going to fray horribly.  I have no idea where I heard it, but I remembered hearing that spraying fabric with hairspray can stop this.  It worked!  Although it didn't stop the fraying completely, it did stop the material from fraying just by being brushed as I sewed it.

It did, however, change the colour of the fabric slightly (something I didn't mind, but just keep it in mind if you try it).

I sewed the outline and French knot islands (that you can't see in this picture unless you know they're there) in a variagated yellow-brown-yellow thread, the internal borders in different shades of green, and the lakes that form some of the borders in a vibrant blue.  The lettering at the top was in green and beige. 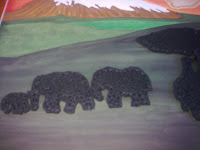 Next I sewed on the silhouettes of the animals.  This is the part of the project I like the least in the finished article.  I find the animals, simply cut out of black felt from a picture found online, looked a little as though they're simply floating in the foreground.

If I had had the time or realised earlier, I may have been able to do something to fix it, but I'm not sure how.  I managed to darken the paint a little below them in hopes of giving them ground to walk on, but I think perhaps I needed something 3D to make it really look right.  But my friend likes them, so I'm happy. 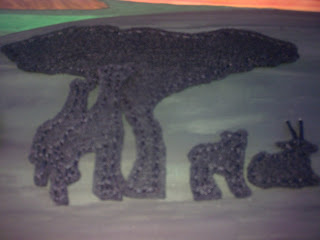 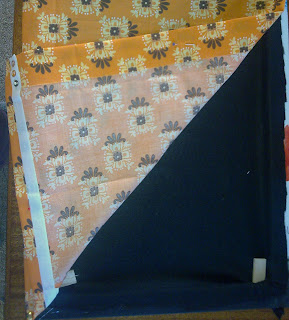 The last thing I did was cover the back.  From doing Mum's canvas, I figured out that covering the back with black felt (the cheaper stuff, not the same as I used for the animals) would stop light showing through the needle holes in the canvas caused when stitching.  These holes don't show through with regular material, but because canvas is quite rigid, it doesn't readjust itself around the thread.

You're basically poking tiny holes in it and if the thread doesn't quite fill the holes, some light shows through.  I glued the edges of that down so it wouldn't shift over time, and then tacked another piece of awesome fabric to the back frame to cover everything, and to hold the ribbon hanger.


As I've said before, I am quite fond of (what I will call) my invention (until I find someone who invented it first!), because it combines some things that I'm not all that great at but really enjoy - painting (which I doubt I'll ever be good at), and embroidery (which I'm going to start working on) - and creates a whole lot of colour and impact in a relatively short amount of time.

So, if you ever see pictures that you think might look cool done in this way, let me know!  Line drawings are best, but since using the photo for Mt Kilimanjaro, I realise one needn't be limited to them.  If you would like one, I'm sure I can make one for you, but I don't think I can send them overseas as the canvas frames are wood.
at 8:59 AM