Book Review: Connie Willis' To Say Nothing of the Dog (and Fire Watch)

It's official, I love Connie Willis.  Yes, I know, I'm only three books into her repertoire, but until I find evidence against it, I stick by my statement.  This is the second novel in the Time Traveling Oxfordians universe (I don't think the series has a title...), and is almost the polar opposite of Doomsday Book in tone, setting, and characterisation.

Ned is busy in the past trying to find out what happened to the monstrosity that is the Bishop's Bird Stump, last seen in Coventry Cathedral before its bombing in 1940.  This almost impossible task has been set him by Lady Shrapnell, who has basically taken over the history department (with her 'generous donations') to aid her in recreating the Cathedral exactly as it was moments before the bombing.

Because of the number of drops (ie time traveling trips) Ned has done in a short amount of time, he becomes ill with time-lag, causing "Maudlin sentimentality, difficulty in distinguishing sounds, fatigue... tendency to become distracted by irrelevancies.  Slowness in answering.  Blurred vision" and his almost being hit by a steam locomotive.  The only cure for this is rest, but because of Lady Shrapnell, that just wont happen in (Ned's present) 2057, so Mr Dunworthy (yes, the very same from Doomsday Book and Fire Watch) sends him to 1888.  Where else could be more relaxing - punting on the Thames, playing croquet, and drinking tea.  Except that Mr Dunworthy has set Ned a task, something that Ned has since forgotten due to the time-lag. And here's where the spoilers start!  Click the picture below for a much shorter than usual review...

I think the main, and perhaps the only theme, of the book is the conflict between the idea of free will and destiny/fate/coincidence. One of the most obvious illustrations of this is when TJ runs computer simulations of the Battle of Waterloo, changing certain important events through the introduction of an historian time traveler.  It is almost impossible to force a different outcome to the battle - Napoleon always loses.  Although that is the most obvious example, the entire story is an illustration of this idea.  Mrs Bittner exerts free will in breaking into the lab and traveling back to the air raid to save elements of the Cathedral, but destiny sets Ned and Verity in the Cathedral at the right time for Tossie to cause the argument that ensures Miss Sharpe does not write to the the papers in 1940, thus informing the Nazis that the Allies had prior knowledge of the raid. Destiny also stops Ned and Verity from being in the wrong place at the wrong time (ie, when Mrs Bittner travels back to save artifacts from the Cathedral).

I think one of the most endearing things about the book in the little side project Dunworthy sets for Finch.  I hate the idea of a future without cats just as much as I hate the idea of people drowning unwanted kittens.  So the two are very nicely cancelled out by his efforts.  I also really like the way romance is featured in the book.  Although it is one of the main foci of the book, it's not at all mushy or sentimental.  In fact, it's more about stopping people from falling in love.  Although I had a very firm belief that Tossie would end up with the butler (as always, the butler did it), I was losing hope as time ran out.  The scene where Baine throws Tossie into the fish pond (which would make a great scene in a movie.  In fact, with the lack of good movies at the moment, may I suggest to Hollywood that they make this book into a film?  PLEASE?) is the most romantic of Tossie's story, and even Verity and Ned are less than lovey dovey. 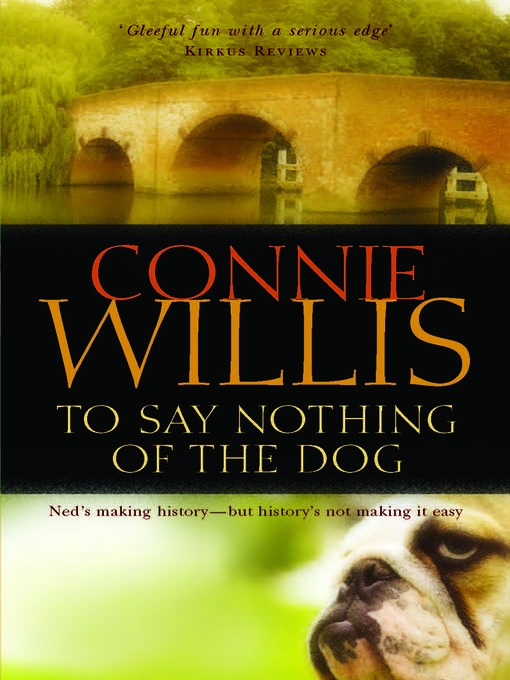 I think it takes a really skilled author to be both entertaining and thought-provoking, especially in both a lighthearted story and a serious story.  If you found Doomsday Book too heavy to finish, do try To Say Nothing of the Dog.  Also, give her short stories a try.  I dug Fire Watch out of the library's stack (it was published in 1984) to read the Hugo and Nebula award-winning titular story, set in the same universe as Doomsday Book, To Say Nothing of the Dog, and Blackout/All Clear (which I'll definitely be reading soon*), and read on through the rest of the stories.  I found A Letter from the Clearys (Nebula award winner), And Come from Miles Around, and Service for the Burial of the Dead the most enjoyable, though the imagery of Daisy in the Sun (Hugo award nominee) has stayed with me.

*Because this has been sitting in my draft-posts for so long, I'm now actually on to reading Blackout.  I'm only three or four chapters in and I'm already hooked.  I don't think it's a spoiler to say Colin (from Doomsday Book) makes an appearance!
at 10:16 AM

Email ThisBlogThis!Share to TwitterShare to FacebookShare to Pinterest
Labels: book review, Connie Willis, To Say Nothing of the Dog