I just finished Supernatural season four, which features the biggest story arc so far.  At the beginning of the season we are introduced to angels and the entire season focuses on the brothers trying to stop Lilith (who we met last season).  I really enjoy episodes that stand alone (or at least mostly stand alone with some reference to the ongoing arc), so this season wasn't my favourite.  But there is a tribute to the great black-and-white monster movies, a cameo from the Ghostfacers, an episode where Dean is scared of EVERYTHING (including a very small, very cute doggie with a bow - hilarious!), and a life-sized talking teddy bear with a death wish.  And there's this:


You can get Supernatural Season 4 at Mighty Ape on special right now, saving $47.  Click on the picture! 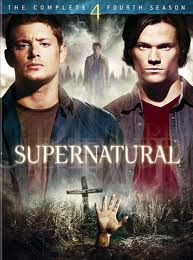 PS:  The picture for the cover of this season does not make Sam look good, am I right?  Dean, however, looks as awesome as always!

Edit:  I notice that the video isn't working, but that you can click through to youtube to watch it.  I suggest you do, it's hilarious, and this video was the only one I could find that's just as it is in the episode - most have added clips and things.
at 5:10 PM