This is (finally) the last installment of the Mum's Birthday series (lol).  My mum loves butterflies, so much so that her bedroom is becoming festooned with butterfly pretties.  I thought I would add to that, but didn't know how to make something very special.  I had been collecting butterfly pictures from the Graphics Fairy, and finally settled on this one: 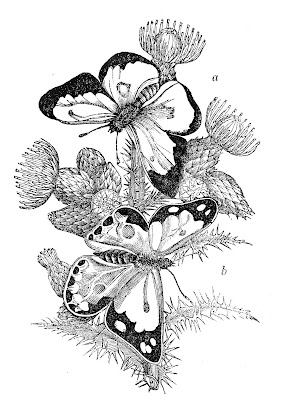 Pretty right?  But not exactly colourful.  So not something to simply print out and frame.  In a flash of inspiration I can only credit to the muses smiling on me (I haven't ever seen anyone do this before), I decided to buy a small painter's canvas, paint it, stencil the image onto it, then embroider it.  I didn't even know if it was possible to embroider painter's canvas when I bought it, but I never let silly things like impossibility stop me when I think I have a great idea for a surprise.  So, while the ladies fingers baked, I printed the image, used a lead pencil to colour in the back of the image then trace it onto the canvas (a technique for transferring images for embroidering that I learned here but altered to use a lead pencil), then painted the background: 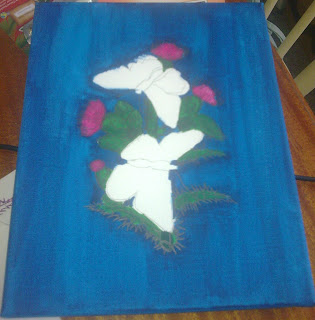 I left the butterflies unpainted because I planned to applique some pretty fabric scraps, and didn't want the paint showing through them.  Next time I will paint further over the boarders of elements that will be appliqued, so that placing the fabric cut-outs need not be so exact.  I found I couldn't see the pencil marks well enough, and so traced it on again (using two reference points and pins to get it in the same place), as you can see in the picture.

Next I embroidered the thistles.  Because they were already painted, I needed only back stitch as if around a patch of satin stitch - the outline, thorns, thistle flowers.  I added a few French knots to be emerging thistle flowers. 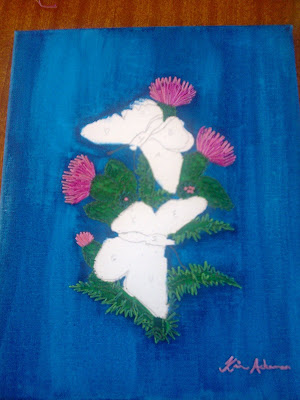 The most difficult part of this process was putting my signature on the bottom.  I forgot about the wooden frame and signed in pencil just a little too low and had to pass the needle through at a terrible angle to avoid blunting it on the wood.  The picture may not show the detail very well, but you get the idea of how the embroidery creates a three dimensional effect.

Lastly, I tackled the butterflies.  First, I tried to simply pin the fabric onto the canvas, but it moved too much.  In the end I tacked the wings and body pieces onto the canvas with dressmaker's thread. 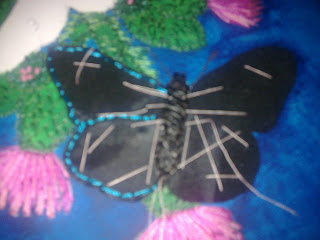 That's a piece of fake leather (the surface splits like anything!) and some shiny fabric left over from an old ball dress.  The white butterfly's wings are scraps from a project Mum did years ago.  After sewing the body with dark brown thread, I sewed around the edge of the wings with satin thread, added French knot eyes, and feelers.  I then made a design for the wings and used the same technique as above to transfer them onto the fabric. 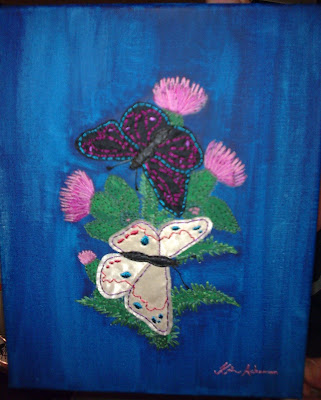 This is (a terrible photo of) the finished product.  Although the photo is a bit blurry, I think you can see what I mean about the three dimensionality the embroidery thread created on top of the painting, and how it is emphasised by the material placed on top.  Anyone with keen eyes may notice that it turned out a little different to the original, with the most obvious example being the designs on the wings.  But I altered it to suit the medium and the colours (too much of that pretty salmony colour would have been ugly), and because I think my wing designs are prettier!

What do you think of it?  I haven't seen anyone else do exactly this before, though it is a fabulous way of creating a beautiful (if I do say so myself!) and very colourful image that is inexpensive (the canvas was from a $3 shop, the fabric was scraps, and most of the embroidery thread was from Mum's collection), and doesn't need framing.  Time will tell how dusty/faded it will get.  Mum loved it and is now inspired to do her own (which, with her permission, I will post on here once it's done).  I'm so happy with how it turned out that I am making one for myself too, and I think I have figured out what mine will be, but will wait until it's finished to announce it!
at 1:05 PM