Mum's Birthday - Part One: The Cake

After two posts in a row without anything to do with cooking or crafts, I'm glad to finally talk about the projects I did for Mum's birthday.  My Mum's birthday is the 17th of April, so this post is very delayed because I have not felt like posting the horrible photos that I manage to take using my phone's camera.  I know, I need a real camera, but if I could afford it, I'd have bought one ages ago.  So I'm getting over it.


Firstly, the cake.  I had thought about what I should make for Mum's birthday cake for a week or so before the day, and had happened to see a picture of an awesome cake in: 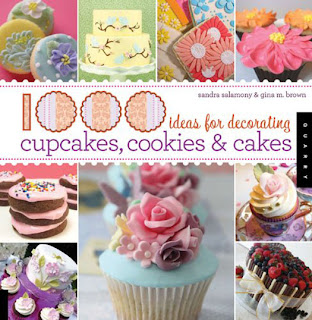 It looked much like the cake in the lower right hand corner of the cover - what looked like ladies' fingers around the outside of the cake and chocolates on top, with a pretty little ribbon.  Suddenly, I knew what I would make:  Tiramisu Cake.

I used the 9" sponge sandwich recipe from The Margaret Fulton Cookbook (1976 reprint of the 1968 book), a book that Mum has always had but never really used.  While perusing the pages, I found another yummy recipe, this one for Spanish fish, that I will share in another post.  The sponge was a huge success on its own, but did it ever take a lot of effort to fold the dry ingredients into the egg whites!  I even had to let Mum take over for a while.  I think I need a bigger plastic or glass bowl for making bread and sponges, because the biggest bowl we have is one of my stainless steel ones, and neither yeast nor egg whites like metal.  Eventually the sponge looked like this: 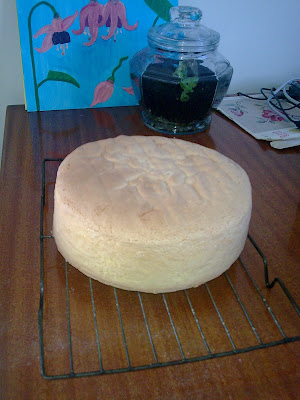 Next, Mum cut the cake because I was totally not game to, and was then chased from the kitchen.  I then filled the sponge with a mixture of 1c of cream, a pouch of mascarpone cheese, 2T icing sugar, and 4T of Kahlua (coffee liquor).  This wasn't from a recipe, as such, I kind of made it up using a recipe for tiramisu, so I tasted it before using it, to make sure that the Kahlua was strong enough and the mixture was sweet enough.  After tasting it, I made sure I left some in the bowl at the end to eat, it was SO good.

Then I covered the top with dark chocolate ganache and added oreo truffles that I made the night before.  Lastly, I took the ladies' fingers I made three days previously and put in the freezer (apparently they go stale really fast), and defrosted them and crisped them up in the oven, then drizzled white chocolate all over them.  When they were set, I cemented them onto the outside using more dark chocolate ganache.  Then I tied the ribbon around.  End result: 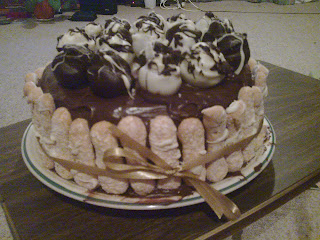 I think it turned out really really well, I'm incredibly proud of it.  I only wish that I had put baking paper under it when I decorated it in order to keep the plate clean, but you live and learn.

I made the ladies' fingers from scratch using a recipe from here.  It may look tricky, but it was surprisingly easy.  I will make them again, because they are light and crispy and I can imagine they'd be great dipped in stuff - hot chocolate, chocolate sauce, chocolate fondue....  You get the picture.  The piping was the only tricky part, and in the recipe they suggest leaving a large amount of room between the fingers when you pipe them so that they can expand in the oven.  They don't.  Well, they didn't for me anyway, no more than any other biscuits.  I found the suggested length of 7.5cm was just enough to reach the top of the cake, but if you wanted to make that basket effect the cake on the cover of the book has, where the ladies' fingers would keep fruit or chocolate from falling off the cake, make them a little longer. 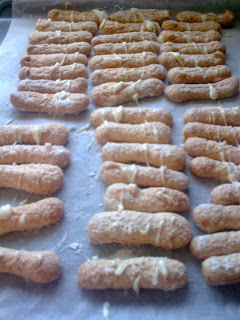 This is them after I drizzled white chocolate over them.  I had too much mixture (or too much empty space on my baking sheets) to fit onto two large baking sheets, so I cooked those and then piped a heart shape (to save for Mother's Day in the freezer) and a large biscuit so I could try one.  I had about four biscuits left over after decorating the cake.

In the next post about Mum's birthday, I'll talk about the croissants I made for breakfast-that-turned-into-brunch-that-became-lunch!
at 12:04 PM