There are so many ways to top cakes, cupcakes, and biscuits - there's ganache, cream cheese frosting, glacé icing, royal icing, fondant, marzipan, buttercream,...  the list goes on and is exponentially increased by the addition of colour and flavour options.  Chocolate buttercream, crimson marzipan, lemon icing; I feel the urge to get out my cookie press/piping gun to play just thinking up examples.
It's not often that I make up new recipes from scratch because I feel like I haven't cooked up enough of the ones that already exist to really start making my own.  Instead, I tweak existing recipes, and success is based on pure luck.  I made a banana cake last week, and decided that a very plain cake needed something a bit interesting to top it off.  I thought of putting fresh blueberries on top sunken into plain vanilla icing, but, as there are only two of us and a cake SHOULD last a few days, decided not to - I didn't want to put the cake in the fridge just to keep the berries fresh.  But then I found a jar with about a tablespoon full of blueberry jam, and had an idea.
Blueberry Icing
Blueberry jam
Icing sugar
Butter, softened
Boiling water (if needed)

Simply beat the butter, add the jam, then the icing sugar little by little aiming for a texture similar to regular icing (except with bits of fruit in it).  If you don't have much jam, and so don't have enough icing when you get to the right texture, simply top up with some hot water and then add more icing sugar to get back to the spreading texture.  It's that easy, and it's really yummy.  Here's a picture of the cake: 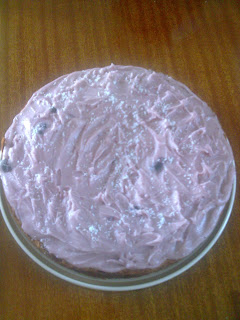 Again, sorry about the quality of the picture - I'm well aware that I am a terrible photographer and that taking photos on my phone shouldn't count.  But notice the lovely bits of blueberry, and the pretty colour.  I put a tiny bit of coconut on top, not for flavour but just to add another texture and colour to the look.  Because jam contains natural or artificial preservatives, there should be no need to refridgerate, any more than you do a cake with glacé icing.
(Oh yeah, also, that's what our table looks like right now.  Kind of ugly right?  That's why I'm going to get the other table out and fix it up!)
at 12:44 PM